Growing a sustainable community through herbal medicine: The story of Aadi Aushadhi 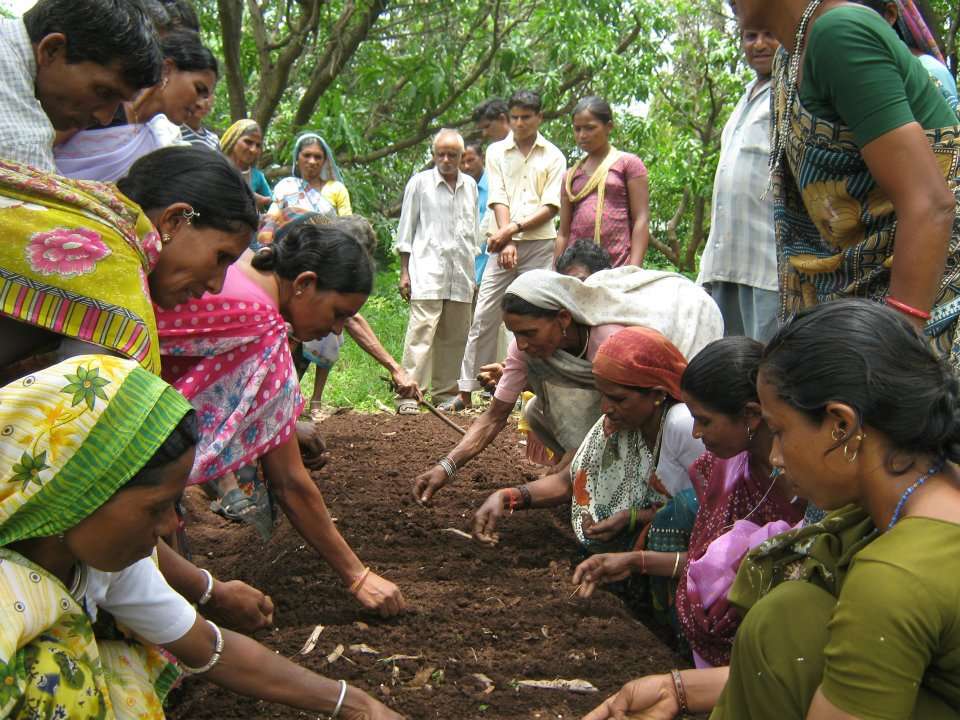 The patch of land behind Ramsingh Vasava’s home in Zadoli village, Dediapada in Gujarat State, western India, may look like an overgrowth of weeds to the untrained eye, with vines crawling up to the roof, and tall, unfamiliar plants growing every which way, leaving scarcely any ground to step on. But to an experienced bhagat (traditional healer) like him, there are no weeds if one only knows how to use them.

Ramsingh is recognized as the best natural healer in the community. Even without formal education, he is able to identify diseases, search for the correct medicinal plants in the forest, process it, and treat his patients. His immense knowledge on medicinal plants was handed down to him by generations of bhagats as part of the Vasava tribal culture.

This knowledge is also what empowered him and his community to take charge of their own land, livelihood, and way of life through a group called Aadi Aushadhi.

“My father taught me about various medicines. He would take me with him in the forest and treat his patients with the help of herbs. But it became very difficult to survive financially, so I had to migrate for work,” Ramsingh said. Bhagats do not usually ask for money from their patients, and so to provide for his family, Ramsingh worked as a laborer in a sugar factory.

The Vasava tribe has long held unique and valuable knowledge on various medicinal plants found in the Shoolpaneshwar forest – one of the richest remaining forests in Gujarat – where they live. However, as this knowledge is passed on through oral tradition and not properly documented, the culture faced the threat of losing this knowledge as bhagats were growing old and migration for livelihood options increased.

Things began to change in 1996, when Lancelot D’Cruz SJ, then doing an ethno-botanical study for his dissertation at St. Xavier’s College, went to Dediapada to seek the traditional medicinal wisdom of the Vasava bhagats.

“The first year was difficult. I visited the villages; I made contacts with the people. It’s important to gain their trust because they will not share their wisdom or their knowledge with you otherwise,” he said. For six years, Fr D’Cruz worked with the Vasava community, learning from their vast knowledge on medicinal plants and documenting this in his study Phytochemical and Biochemical Studies on some Ethnomedicinal Plants of Dediapada Forests.

Fr D’Cruz learned that despite the richness of the natural resources available to them, the community lived in poverty. Deeply impressed by the wisdom of the tribals, he sought a way for them to benefit from the research they helped him complete.

“Scientific knowledge should benefit the poorest of the poor, and my PhD is all from their basic knowledge. So I began to think, what can the community get from this?” he said.

First was to address the looming extinction of the bhagats’ wisdom on herbal medicine. Through a three-year project with the Gujarat Ecology Commission (GEC) (video), the Jesuit botanist was able to form a group of 35 bhagats from different villages and record and cross check their inputs on different medicinal plants and practices.

After that, he joined hands with Jeevan Tirth and the Manthan Education Programme Society India in officially forming what is now called Aadi Aushadhi.The goal was to involve the whole community – especially women, as bhagats were only men – and show them that they could have a sustainable livelihood using their medicinal plants. But it was not an easy task.

A change of mindset

Aadi Aushadhi started with a three-day “mind-changing workshop” where they lost some of the good bhagats they connected with in the first project.

“Initially (during the GEC-funded project), we could give them Rs. 100 a day for coming to a meeting, but when it ended we couldn’t anymore. So we told them ‘Now, you choose to come. You won’t get 100 rupees.’” he said.

“We tried to get them to change their mindset from just being present and sharing their wisdom, to actually wanting to do business. Some of them went off, but then there were new ones who joined,” he added.

Several women became part of the group through the workshop. Eventually, three self-help groups were formed with tribals from different villages under the umbrella of Aadi Aushadhi.

The members underwent trainings from preservation techniques to make the medicine last longer, to mixing different plant materials for various illnesses, to packaging the products to make them more appealing to the market. They were taught how to use machines in processing their herbal medicine such as drying and extracting, which used to take days when done by hand. They also learned how to cultivate these medicinal plants in their own backyards instead of taking them from the forest that depletes the natural resources.

Aside from giving the members a steady source of income within their land and culture, Aadi Aushadhi had some “side effects” that improved life not only for its members, but the whole community, Fr. D’Cruz said.

Growing their medicinal plants organically improves the quality of the land and protects the biodiversity of the forest. This also meant the members had to learn water harvesting, which greatly benefited the community. Water shortage used to be a problem in the villages after the monsoon season, but since they learned collecting rainwater for their medicinal plants, this problem diminished.

Furthermore, with the increasing demand for medicinal plants as people started to come to Aadi Aushadhi for different treatments, the group convinced their government to include the planting of medicinal plants and construction of nurseries in the list of jobs supported by the Mahatma Gandhi National Rural Employment Guarantee Act, a social security scheme that guarantees a minimum of 100 days of definite wage employment in rural areas every year. As a result, more jobs are created for tribals within their land, and migration is reduced.

Before, when the men in the community migrated for work, they would bring their whole family with them and children are not able to go to school. But with the decrease in migration and increase in people’s income, more of the youth are educated. Gender equality is also promoted as more girls are now able to access education, and women are playing an active role in sustaining livelihood for their families and community.

“The young women are the ones who are really passionate about knowledge in medicine. They see that it helps their health, their family, and to get income,” Fr. D’Cruz said.

A lot has changed for the Vasava tribe since the inception of Aadi Aushadhi, and Ramsingh’s story is a testament.

He was part of the first batch of bhagats who became a member, and despite being unable to read and write, he was the fastest learner in the group, “who has tremendous sense of observation and is willing to learn and to try out new techniques very fast,” according to Fr. D’Cruz.

Today, he does not need to migrate every six months to work at the sugar factory anymore. He built a big house for his family and sent his son to St. Xavier’s College in Ahmedabad. He also shares his knowledge to new members of the group and visitors in their office.

He and the other members are now taking leadership in managing Aadi Aushadi with some support from their partner organizations. Each self-help group they supervise has their leader and secretary. They make the products themselves, attend to patients who consult them in the office, document monthly meetings, keep all the accounts, and do the bank transactions.

At present Aadi Aushadhi has 115 active members. They are continuously expanding the network by sharing their knowledge and training to other groups who want to learn.

“The idea is not that Aadi Aushadhi becomes this big pharmaceutical company,” Fr. D’Cruz said. “The idea is to help these small groups produce medicine and that they are able to get the benefit for themselves.”

This story was first published in Ecojesuit Online.

Leave a reply Click here to cancel the reply

Except where otherwise noted, content on this site is licensed under a Creative Commons Attribution-NonCommercial 3.0 Unported License.

Copyright © 2023 Ecology and Jesuits in Communication.

We're not around right now. But you can send us an email and we'll get back to you, asap.