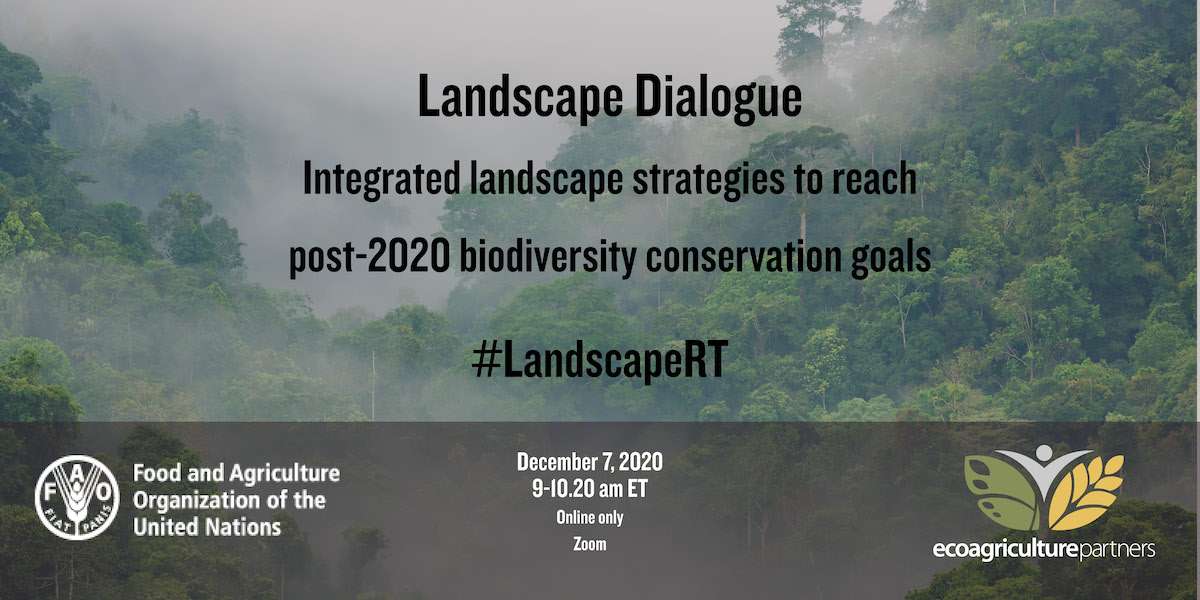 Online only via Zoom (registration here)

Join us for the next Landscape Dialogue convened by FAO and EcoAgriculture Partners to gain insights from distinguished speakers as they discuss and share their vision for how integrated landscape approaches could guide major initiatives pursuing post-2020 biodiversity goals. Originally scheduled to follow the 15th Meeting of the Conference of the Parties (COP 15) to the Convention on Biological Diversity (CBD) (now scheduled for May 2021 in Kunming, China), this dialogue aims to set the stage for a sprint over the next decade to reverse global biodiversity decline.

We invite everyone working to advance integrated landscape management to join this Dialogue.

The Landscape Dialogue is part of an on-going series of discussions focusing on climate change, agriculture and landscapes. Ecoagriculture Partners and the Food and Agriculture Organization of the United Nations (FAO) Liaison Office for North America have jointly organized the series since 2009.

Midori Paxton has been the UNDP Head of Ecosystem and Biodiversity Programme based in New York since 2016.  She is responsible for a large portfolio of biodiversity projects, comprising approximately 300 projects in 130 countries.  These projects include support for strengthening protected area systems, biodiversity mainstreaming in landscape/seascape and development and sectoral planning, and for promoting nature-based solutions for climate change mitigation/adaptation and for sustainable development.  She oversees a range of biodiversity finance initiatives including the Biodiversity Finance Initiative, Task for Nature-Related Financial Disclosure initiative, The Lion’s Share Initiative among others.  Previously, she worked as a Bangkok-based Regional Technical Adviser, providing policy and programming support for countries in Asia.  Between 2000 and 2010, she worked in Namibia; much of the time working under the Directorate of Parks and Wildlife Management, Ministry of Environment and Tourism, coordinating the project to strengthen the national protected area system. Midori holds a master’s degree in Environment and Development from the University of Cambridge, and author of six books and hundreds of published photos and articles.

Trained as a Development Economist in Paris, Marco returned to Guatemala in 1988. In 1989 he established the “Forestry Action Plan” Bureau and supported the establishment of the Mayan Biosphere and the creation of the Central American Commission on Environment and Development (CCAD). In 1990, Marco created FUNDAECO and has led the organization for over 30 years. Under his leadership, FUNDAECO has grown up from a team of four volunteers to one of the most important Environmental NGOs in Central America, with over 180 staff members. Currently, FUNDAECO supports the participatory management of over 15 protected areas and supports over 100 communities in sustainable development activities. FUNDAECO has been driven by Marco´s balanced vision of conservation and sustainable economic development; and has implemented a series of pioneering initiatives that have brought together conservation, agrarian and rural development issues while including human rights-based approaches.

Between 2002 and 2015, Irene was Chief of the Animal Genetic Resources Branch and Chief of the Animal Production Service in FAO, and acted as Secretary of the Intergovernmental Technical Working Group on Animal Genetic Resources. Irene is an agricultural scientist with a Ph.D. from Hohenheim University and an MSc from Göttingen University. Between 1994 and 2002 she was assistant professor at the Institute of Livestock Ecology, Giessen University, where she coordinated international and interdisciplinary research programs. Earlier in her career, she worked in development (GIZ, Africa), as a scientific editor, and for development NGOs. She has organized international policy and technical conferences and published extensively on scientific and policy topics, and she has served in various advisory committees and review panels.

Jyoti Mathur-Filipp: Director of the Implementation and Support Division at the Secretariat of the Convention on Biological Diversity

Ms. Jyoti Mathur-Filipp is the Director of the Implementation and Support Division at the Secretariat of the Convention on Biological Diversity since 2018 and is leading work on the post-2020 global biodiversity framework. She started her career with UNDP in 1993 as Programme Officer with the Global Environment Facility, after which she worked on UNDP Capacity 21 program as Information Officer. She holds an Advanced Degree in Urban Policy, Management & Planning from the New School for Social Research in New York and a Master’s in Business Administration from New York’s City University.

Mike Parr joined ABC in 1996 after graduating from the University of East Anglia, UK, and working for BirdLife International. He has co-authored several books including Parrots – A Guide to the Parrots of the World, Important Bird Areas in the United States, and The American Bird Conservancy Guide to Bird Conservation, along with numerous articles and papers. He is Chair of the Alliance for Zero Extinction and a member of the Board of Directors of the Sustainable Forestry Initiative.

Except where otherwise noted, content on this site is licensed under a Creative Commons Attribution-NonCommercial 3.0 Unported License.

Copyright © 2021 Ecology and Jesuits in Communication.

We're not around right now. But you can send us an email and we'll get back to you, asap.